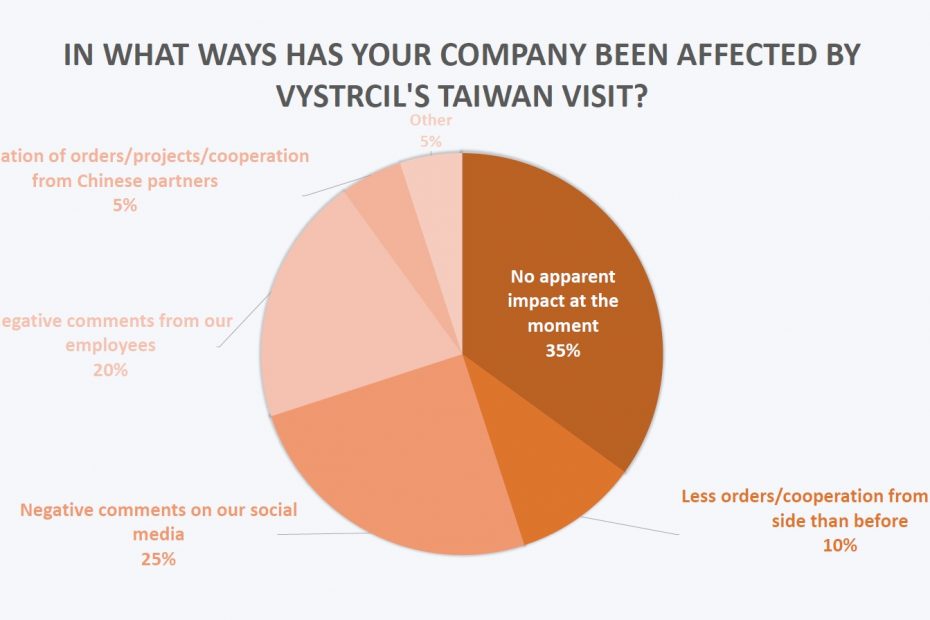 The survey was organized by CzechCham. Between 22nd and 28th October 2020, a total of 13 Czech companies active in the China market participated in an anonymous flash survey on the impact of Czech Senate leader’s official visit to Taiwan. At the beginning of September 2020, Czech Senate leader Milos Vystrcil officially visited Taiwan, where he proclaimed “I am Taiwanese”, which caused backlash from China. This survey aimed to investigate the potential impact of the visit on Czech businesses in China and with China.

Here is what we found:

The results of the survey show rather optimistic outlook regarding the impact of Czech Senate leader’s September visit to Taiwan, as majority of respondent companies haven’t suffered any impact so far, with no significant predicted impact on revenues in 2020/2021, nor they think the event will cause any long-term damage to their company’s trade (business) with China in the future.

Majority of Czech companies active in the China market haven’t suffered any impact so far, while 46% of companies have been negatively affected in some way.

In some cases less orders/cooperation or even cancellation of orders/projects/cooperation from Chinese partners is being reported.

Vast majority believes there will be no significant impact on revenues, while 31% predict drop of no more than 20% in 2020/2021.

Majority of companies show positive outlook about the impact of Taiwan visit in terms of its duration, with 39% believing it will affect their Czech-Sino business long-term.